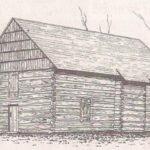 In August 1801, a distinctly American religious movement saw its birth in the Cane Ridge Revival in Bourbon County, Kentucky. The Leaders of the movement, Barton Warren Stone of the Kentucky “Christians,” along with Thomas Campbell and his son, Alexander of the West Virginia “Disciples,” had their roots in the Scottish Presbyterian Church. As the movement grew, a large number of people began calling themselves Christians or Disciples of Christ. In 1832, the two groups were officially brought together at Hill Street Christian Church (which would later become the Central Christian Church in Lexington with a handshake between Stone of the Christians and “Raccoon” John Smith of the Disciples. To this day the movement is called The Christian Church (Disciples of Christ).

In May 1908, another revival held in the rapidly growing east end of Lexington would bring about the birth of Woodland Christian Church when the renowned evangelist Charles Reign Scoville preached at Broadway Christian Church. The attendance and response was so great that it was moved to the Woodland Auditorium in what is now Woodland Park, across the street from the present church building. In all, 106 people who attended the revival decided to become charter members of the new congregation. 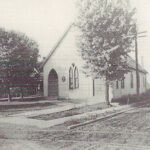 The first worship service of Woodland Christian Church was held at the Woodland Auditorium on May 24, 1908. The present site of the church was purchased a month later and a frame church building was constructed. The building was dedicated on November 20, 1908. Professor B. C. Deweese, a faculty member at the College of the Bible (now Lexington Theological Seminary) agreed to be the acting minister until Charles F. Powell was called as pastor later in 1908. 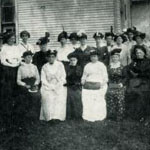 The cornerstone for the present building was laid on October 29, 1922. Realizing a dream that had been proposed in 1920, the first Sunday school classes were held in the red brick building on February 17, 1924. The first worship service in the new Sanctuary was Woodland Christian Church’s cornerstone, laid October 29, 1922 held on March 30. The building was officially dedicated on April 5, 1925 and in January of 1946, the debt was retired with a Note Burning Ceremony.

Indicative of Farish’s and Woodland’s commitment to diversity and dialogue, the new church was shared with the congregation of Temple Adath Israel from 1924 to 1926 following a fire at the temple. The congregation was involved in many ministries including fighting poverty, racism, and intolerance on many levels. Woodland was active in the work of the Kentucky Council of Churches and in the Cane Ridge Preservation and Restoration project. From its early days, the church supported “Living Link Missionaries” including Mrs. Vera Carpenter and Dr. Keene Watson.

On November 20, 1960, a dedication ceremony was held honoring the remodeling of the sanctuary, including the installation of a new Reuter pipe organ, and the receipt of several memorial gifts. The property across Kentucky Avenue was purchased in 1966 to create one of the church’s parking lots and the properties between the church and Oldham Avenue had been purchased as well.

Though women had been stalwart workers and supporters of Woodland from its beginnings, it wasn’t until December of 1977 that three women, Emily Ball, Gladys Scheer, and Bertha Wilhoit, were elected as elders. Since then women have filled many of the positions within the church including that of pastor (Dalene Vasbinder, 2009-2018 and Christy Jo Harber, 2020 – present). The early activities of the women were coordinated through the Ladies Aid Society (which became a part of the Christian Women’s Board of Missions), the Women’s Christian Missionary Society and the Daughters of Woodland. The present-day Open Circle has continued the strong work of the women of the congregation.

The congregation has been involved in numerous outreach projects including the HOPE Center, God’s Pantry, Habitat for Humanity, Green Chalice, and many other social justice ministries of the regional and general church.

Throughout its history the congregation has supported the ministry of Lexington Theological Seminary (known from 1865 to 1965 as the College of the Bible). Many students have served in a number of capacities on the staff of the congregation. A number of Woodland members have gone into the ministry including Wilbur Wallace, Homer Gamboe, E. Tipton Carroll, Jr., Paul Gray, Nancy Jo Kemper, Malcolm “Mac” Warford, Julie Schmitt Metzger, and Janet Anderson.

As the Woodland Christian Church grows into the 21st century, we have been challenged to embrace new technologies in order to continue our ministry and meet the needs of the people during the COVID-19 global pandemic, and beyond.

Subscribe to our weekly E-minder and
monthly ECHOES newsletter